The Jewish cemetery in Ryn (Rhein) is located on a hill above Rynskie Lake, at 38 Ratuszowa Street (former Nikolaikenstrasse). The necropolis was probably established in the second half of the 19th century, when the local Jewish community was established.

Little is known about the history of this place until 1945. During the years of the People’s Republic of Poland, the cemetery plot was located on the premises of the Suwałki Forest Production Company “Las”. A latrine for the plant’s employees was built in the cemetery. In the seventies, Przedsiębiorstwo “Las” submitted an application to the Office of Denomination for permission to liquidate the cemetery. The authorities did not grant this request, ordering at the same time that the area be fenced and photographic documentation be made.

In the middle of the nineties, a plot of several hectares of land after the collapsed “Las” factory was bought by Jadwiga C., wife of Leon Ż., the owner of one of the boarding houses in Ryn. The land was to be used for recreational and tourist purposes. In April 1995, the new owner applied to the Town Council in Ryn for permission to liquidate the cemetery. However, this request was refused.

In May 1995, Konrad Zbrożek, editor of “Gazeta Warmii i Mazur”, became interested in the matter. During his visit to Ryn, he visited the cemetery, where there were about 10 tombstones, with inscriptions in German and Hebrew, commemorating, among others, members of the Goldstein and Podbielski families. At that time, Konrad Zbrożek took a few photographs. One of the photographs – depicting the well-preserved matzeva Miriam of the daughter Moshe – was published as an illustration for the article “Business with ancestral spirits”. (Gazeta Warmii i Mazur, no 118 of 23.05.1995). 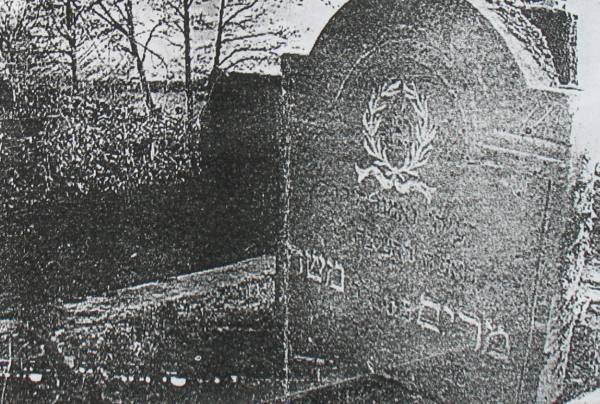 In the autumn of 1995, Jadwiga C. sold the land to Piotr J., the owner of a well-known window manufacturer. A few days after the Catholic world of the dead, workers subordinated to Piotr J. began to obliterate the last traces of the Jewish cemetery. The tombstones were taken to a rubbish dump, buried in the pit and covered with a layer of rubbish. However, the matter could not be kept secret. Municipal authorities and the prosecutor’s office intervened, the media took an interest in the devastation, among others, Gazeta Warmii i Mazur and Kurier Poranny.

On November 7, 1995, city officials, accompanied by a policeman, stated that 7 matzevot had been removed, 5 graves without tombstones had been dug up and the cemetery fence had been destroyed. Some of the tombstones found in the rubbish dump were secured in the City Hall’s warehouses. The proceedings initiated by the prosecutor’s office in the case of devastation of the historic burial place were discontinued after a few months.

The cemetery is located within the Jocz enterprise at 38 Ratuszowa Street. Access to the cemetery is impossible. According to the information obtained from the company’s employees, it is also forbidden to take photos of the devastated necropolis.

We are looking for all information about the Jews from Ryn (Rhein) and their necropolis. We are also waiting for the accounts of people who remember this cemetery from before World War II.