March: The museum about the East Prussian Jews will be created! Our association has received a notice of grant from the (German) Federal Foreign Office for this year to finance the first stage of a permanent exhibition “Museum New Synagogue Kaliningrad/Königsberg”.

Jun 2019 Training for city guides in the footsteps of the Jews of Königsberg was carried out in cooperation with the Foundation for Synagogue Construction Kaliningrad. Conception of trails for Jewish history. 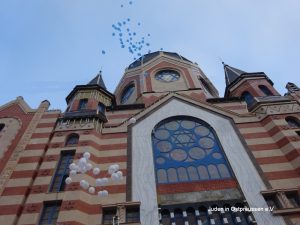 Nov 2018 Inaurugation of Reconstructed Synagogue of Königsberg in Kaliningrad 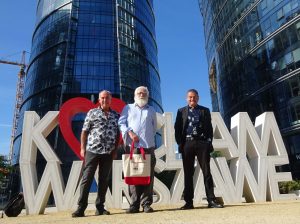 Aug 2018 Lectures and international contacts at IAJGS in Warsaw

Feb 19 2018 Lifting the dome (23 t) on the carcass of the synagogue in Kaliningrad (It is not our activity, but we were very excited about it) 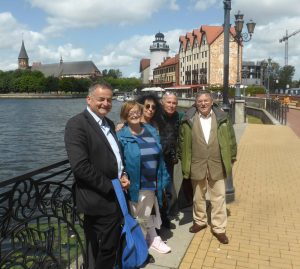 Presentations before the opening of the Exhibition
“About a Zionist Cereal Trader, Patrons and Health Tourism
News about the History of the Jews in Koenigsberg around 1900″ 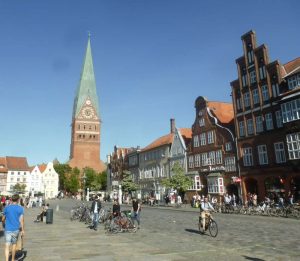 Lueneburg, Germany 2017 May 31, in the museum: “Ostpreußische Landesmuseum”, 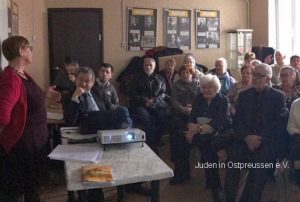 Kaliningrad, Russia 2017 March 6 in at the Hesed Office at Copernicus St. 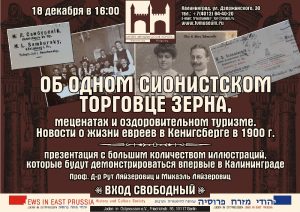 Presentations before the opening of the Exhibition
Kaliningrad, Russia, Dec 18 2016 “Kick Off Event” in Museum Friedlaender Gate 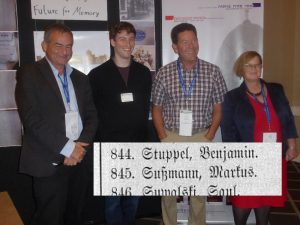 Aug 2016 Lectures and booth at IAJGS in Seattle 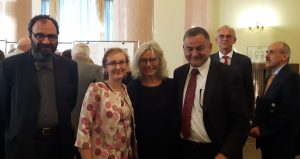 Jul 2016 Concert in Kaliningrad, songs of Werner Richard Heymann born in Koenigsberg with his daughter Elisabeth. 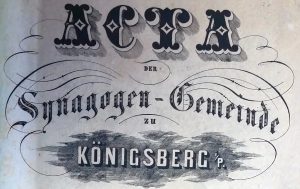 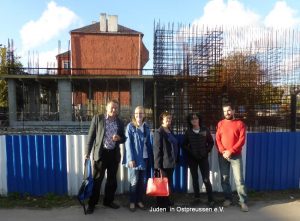 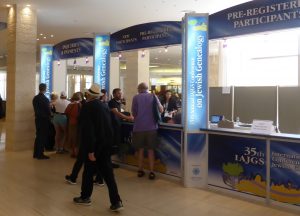 Jul 2015 Lectures at IAJGS in Jerusalem 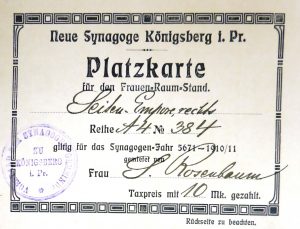 Exhibition “Jews in Memel”
Sept 21 till Oct 10 2014 in Olsztyn (Allenstein) (Poland) at the Mendelsohn House on the occasion of the 8. Jewish Days of Culture,

Exhibition “Jews in Memel”
Jun 26 till Sep 13 2013 in New York / (USA),  From the border town out into the world – 100 years of Jewish life in Memel / Klaipeda at the Holocaust Resource Center & Archives, Queensborough Community College, Bayside, NY, 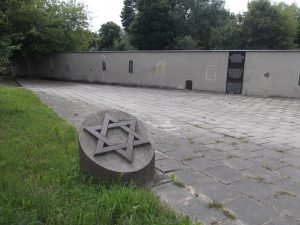 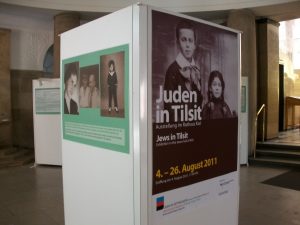 The book about the 200 years East Prussian Jewish History, in German 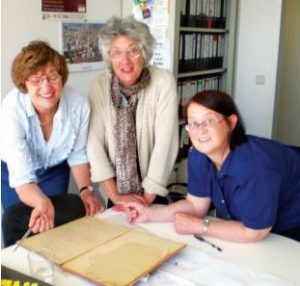 2009 sisters Margie Goldman and Anne Steiner from UK came to Berlin. Background: Their Grand-Grandfather Adolf Funk was an important agent for the shipping company Hapag Lloyd in the wave of emigration from east to west in the 1850s. 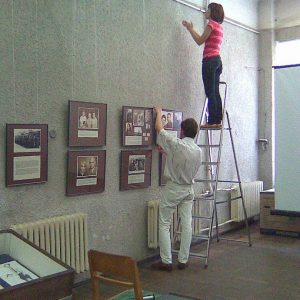 Aug 2008 Lectures at IAJGS in Chicago

Ivor Segalowitz in NYC spent his childhood in Memel and was a Holocaust survivor. He contributed much material for the first Exhibition Jews in Memel

Founding the society on September 05, 2004 in Berlin with the following name:
Jews in East Prussia. Registered Association of History and Culture

Horst Leiber from Wuppertal Germany was one of the very few former East Prussians who dealt with the history of the Jews in his homeland. He was collecting material and had a large correspondence to eye whitnesses in Israel. After his death the scientific legacy of him was transferred to the library of the Society Jews in East Prussia in Berlin.

Meeting Isaak Rutman in Sowjetsk (Tilsit), he was a collector of German remains during communist area and his home was a museum. He survived as a Jew the war in Leningrad and collected stories about Jews in Tilsit.

The Jewish orphanage, remaining building next to the demolated Great Synagogue of Koenigsberg

Visiting the area of the former Heart Island of Koenigsberg, ruin of the cathedral

Visiting Kaliningrad (Koenigsberg) after the Fall of the Iron Fence, Postcard with the Northern Railwaystation, still with a Lenin Memorial.