We invite you to discover the Jewish Königsberg in Kaliningrad. The first brochure describes the residential area where most of the Jews in the city lived traditionally. The route begins at the stock exchange and ends in front of the rebuilt synagogue. 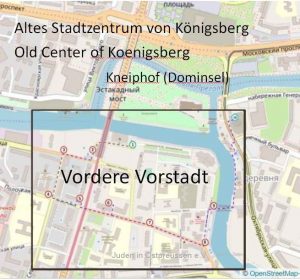 The history of the Jews in the district Vordere Vorstadt, which was located directly south of the cathedral island (Kneiphof), is the connecting theme of this tour, which tells various aspects of social and economic life. Places from past synagogues are shown and some outstanding personalities of Königberg are introduced. From the last chapter of the city of Königberg, little known “Jewish houses” are presented, from which the Jews of Königberg were sent to extermination. The brochure was conceived by the association Jews in East Prussia. 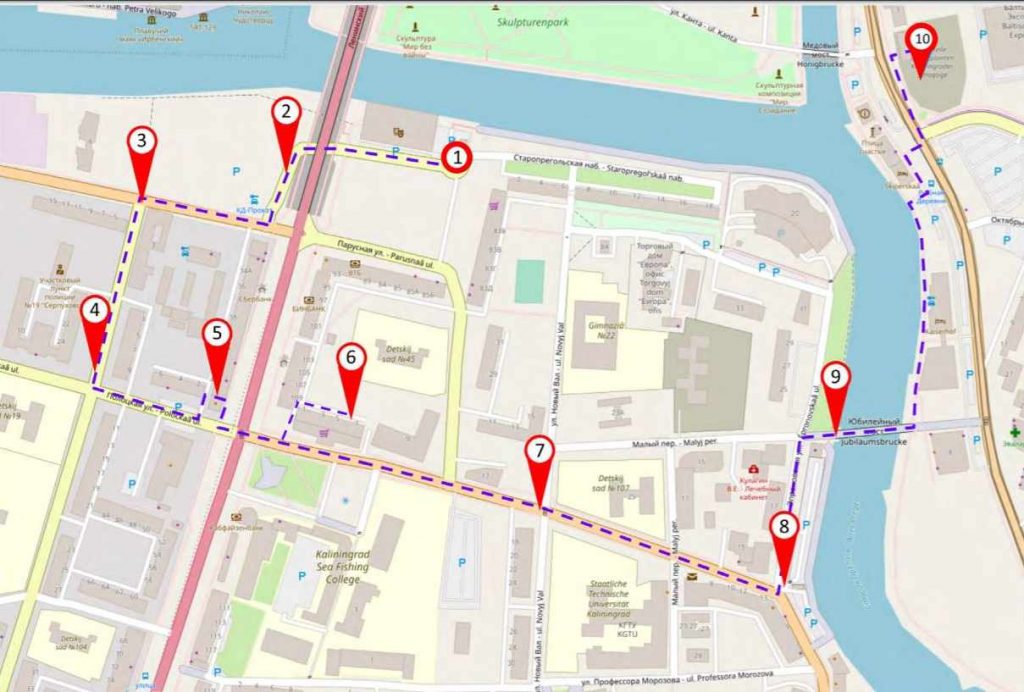 The walking tour brochure can be obtained in the synagogue shop or free download: Walking Tour Pdf Download >>

New: Also in Hebrew and Russian for Pdf Download, see below

The so-called Neue Börse, designed by the architect Heinrich Müller, was built between 1870 and 1875 on the site of today’s bridge, the Green Bridge. In the second half of the 19th century, a lot of grain was traded in this stock exchange. Königsberg was one of the most important grain export towns on the Baltic Sea. Its importance increased after the town had a direct railway connection from Königsberg to the Russian Empire and from 1860 onwards. Many grain traders came from the Lithuanian or Belarusian areas. They were predominantly Jews. The quarter south of the stock exchange was called the Vordere Vorstadt. Traditionally, many Jews lived there. This is also proven by an illustration from the year 1844. 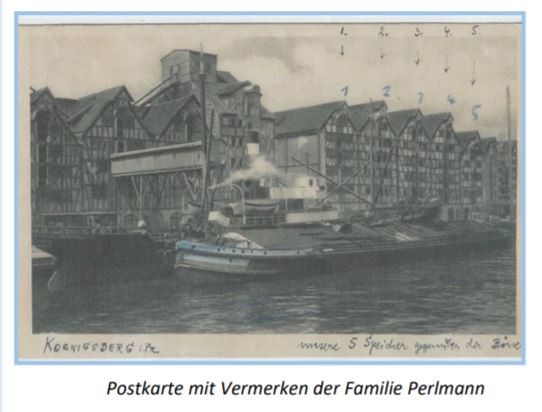 The arm of the Pregel carries the name Hundegatt since ancient times. The merchants used to have their storehouses here. Until 1924 the imported grain was also stored here. One of the founders of the Adat Jisroel congregation was  Max Mordechai Perlmann, a merchant from Minsk, owned five warehouses there. 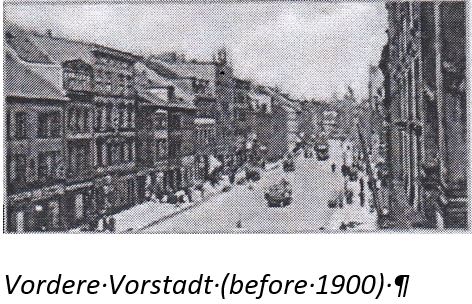 If you look in the other direction, across the street, about the middle between the Stock Exchange and the next street corner, you look at the square where the “Polish Synagogue” stood in a backyard since 1865. This simple prayer house had been built by merchants who had their roots in the neighboring Polish regions and held their services in the Polish rite. Rabbi Dr. Iser Nischkowski died in 1933. This synagogue was closed by the National Socialists before the November pogrom.

Now you turn into a street that was called Bahnhofstraße until the 1920s, because at its end there was the old Königsberg railway station 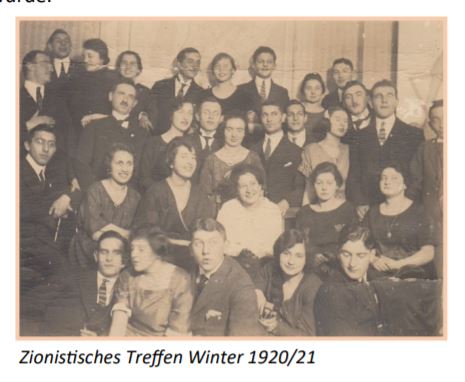 Exactly next to the building of the amber factory there used to be a narrow street, the Feuergasse, at the end of which there was a Hasidic synagogue, a so-called “Stiebel”, this was situated at Feuergasse No 2 Poorer Jews but also many Christians lived here around the turn of the century.
At the beginning of the twenties this street was also a meeting place for the Königsberg Zionists. Although Viktor Chaim Arlosoroff (1899-1933), who had attended the grammar school in Königsberg, was no longer living in Königsberg but in Berlin at that time, he regularly came to visit friends. A photo of a Zionist meeting taken in the winter of 1920/21 here at the meeting point in Bahnhofstraße bears witness to this. 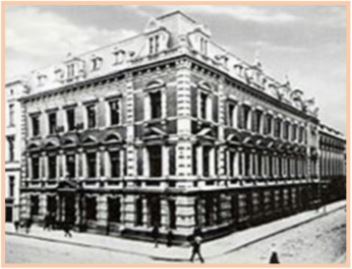 In 1858, the entrepreneur Moritz Becker and his partner Friedrich Wilhelm Stantien began to mine amber on an industrial scale. In 1861 Becker leased the right to extract amber from the Prussian state.

The company built the first amber mine in Palmnicken. From these profits, Becker donated a lot of money for the construction of the synagogue, which was completed in 1896.   In 1899 he sold the Amber concession to the Kingdom of Prussia and the state founded the Königliche Bernsteinwerke Königsberg (Royal Amber Factory). This building was founded for this purpose. Many amber workers were employed in it. The greatest specialists were Jewish amber grinders, whose families came from the Palanga [now in Lithuania. Most of their families lived in this quarter. 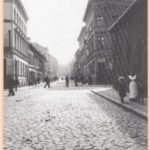 Many Jewish families lived in this street. Among them was the family of Levin Minkowski, who came to Königsberg in 1877 to give his sons a better  education. Hermann Minkowski (1864-1909) became a well-known mathematician and his older brother Oskar (1858-1831) an important physician.  One of the most famous inhabitants was the famous Jewish scholar, Talmudist and Rabbi Israel Salanter (1810-1883). He came from the Lithuanian town of  Žagarė. He lived in various European cities and spent his last years here in Königsberg, where he also died. His grave can be visited at the Jewish cemetery.

We now turn onto the former Kaiserstraße. 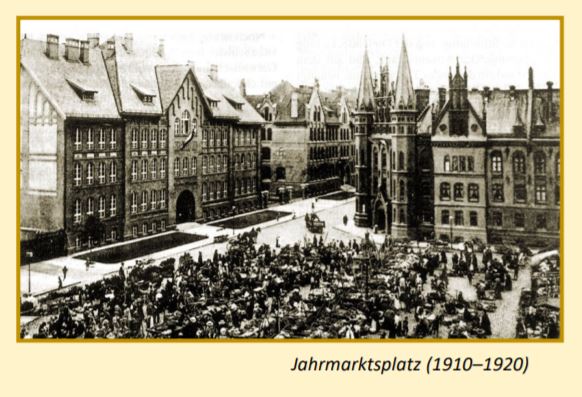 This road was built at the end of the 19th century on a moat and was considered very modern at that time. Many Jewish families moved in here and also established their companies in this street. Very important, for example, was the representation of HAPAG ( the Hamburg American Shipping Line), which was located on the corner of Kaiserstrasse and Vordere Vorstadt. HAPAG sold ship tickets for emigration to America. Many Jewish families came from the  Pale Settlements by train to Königsberg, bought their ship tickets here and then sailed  on in the direction of New York. HAPAG’s chief agent, Adolf Abraham Funk, had come to Königsberg from Palanga in Lithuania and had set up the emigrant business there.

In this area there were also many inns and hotels, which were traditionally close to the railway station. There was also a kosher hotel.

The Hotel Mazie was run by Hannah Mazie, who came from Mir. She was strictly religious and also wore a wig. In summer she ran a kosher guesthouse in the seaside resort of Cranz. 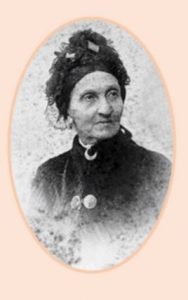 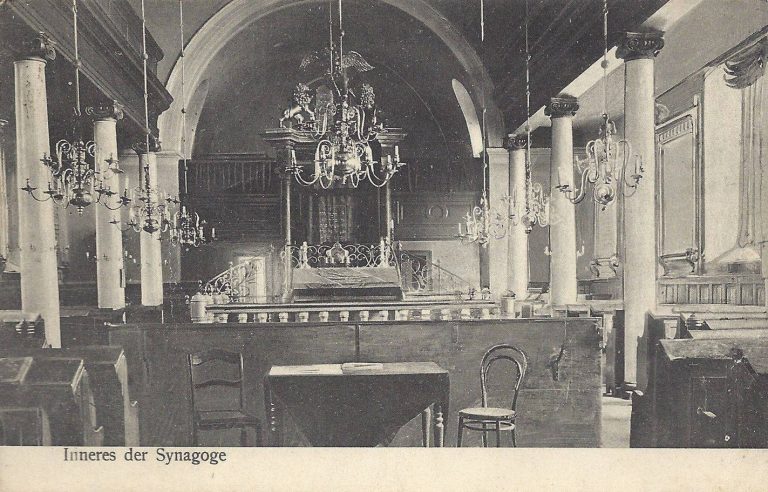 The first synagogue of Königsberg was inaugurated in 1756 on the north side of this small street, which is hardly recognizable any more. Before that, the Jews had a rented prayer room in today’s Theaterstraße. This synagogue was also destroyed during the great fire of 1811, but was rebuilt in 1815. At that time about 1,000 Jews lived in the city. Next to it was the Mikve, the traditional Jewish bathhouse. The house next door housed a Jewish old people’s home. It bore the name “Israelisches Stift” and existed until 1942. 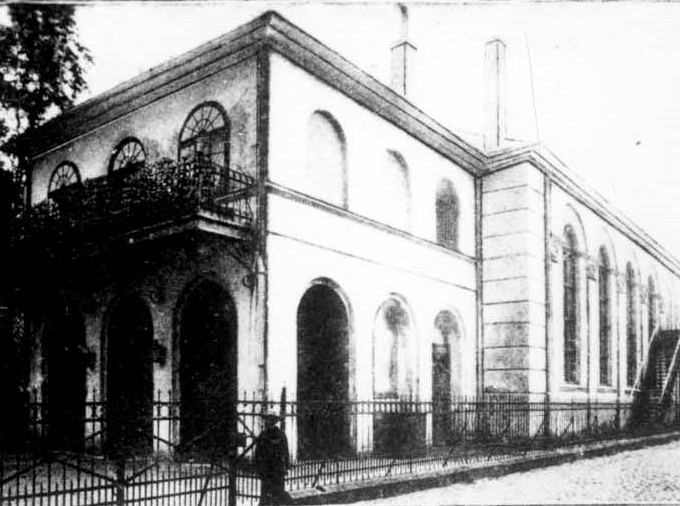 In 1893 the congregation Adas Jisroel was founded in the town and in the same year built its own synagogue on the other side of the street (the south side). The Old Synagogue was set on fire during the November pogrom of 1938, the Adas Jisroel Synagogue was not set on fire because there were other buildings in the neighborhood.

In the next street, whose houses were built at the end of the 19th century, Jewish families moved who, according to tradition, wanted to be close to the synagogue. During the National Socialist era, Jewish families had to move from other streets here to houses in or near Selkestraße. 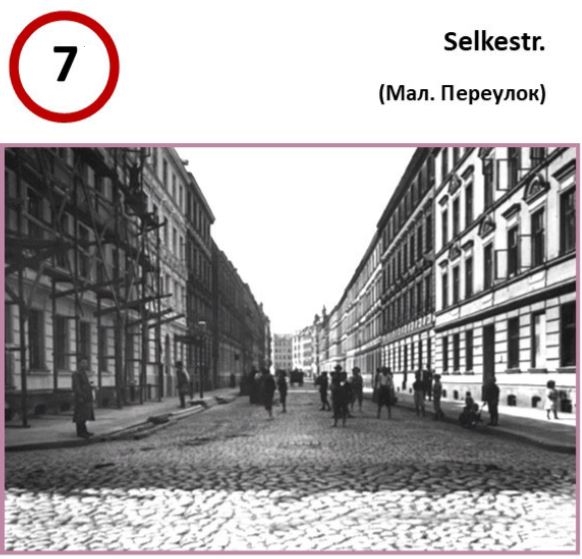 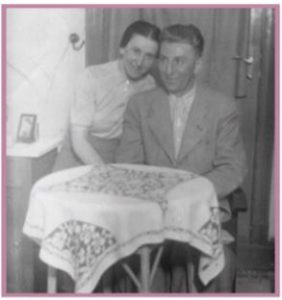 He came from a family in Konigsberg. His merits for the town, were especially in the field of social policy, were so great that the town of Königsberg named this newly built street after him after his death. In 1933 the National Socialists changed the street name to Salzwiesen Street. Every trace of the merits of Jews was to be erased. 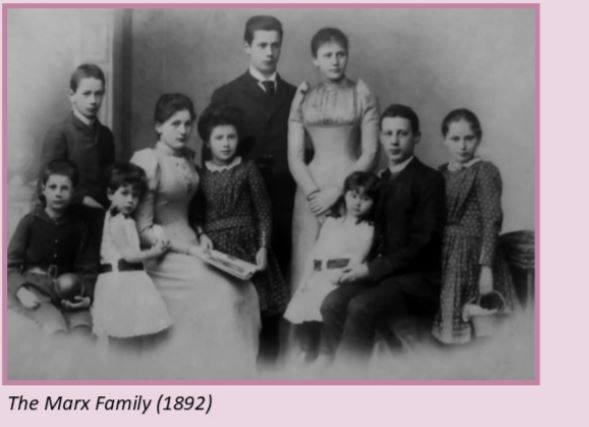 We look over to the other bank. There were many representative buildings here. Among others, the banker George Marx (1843-1927) had his residence here. His wife, the poetess Gertrud Marx (1851-1916) and his 12 children lived with him. Marx was the founder of the Norddeutsche Creditanstalt, a bank with which he invested heavily in the economy and development of the city and the region. In addition, Marx was an important philanthropist of the city. 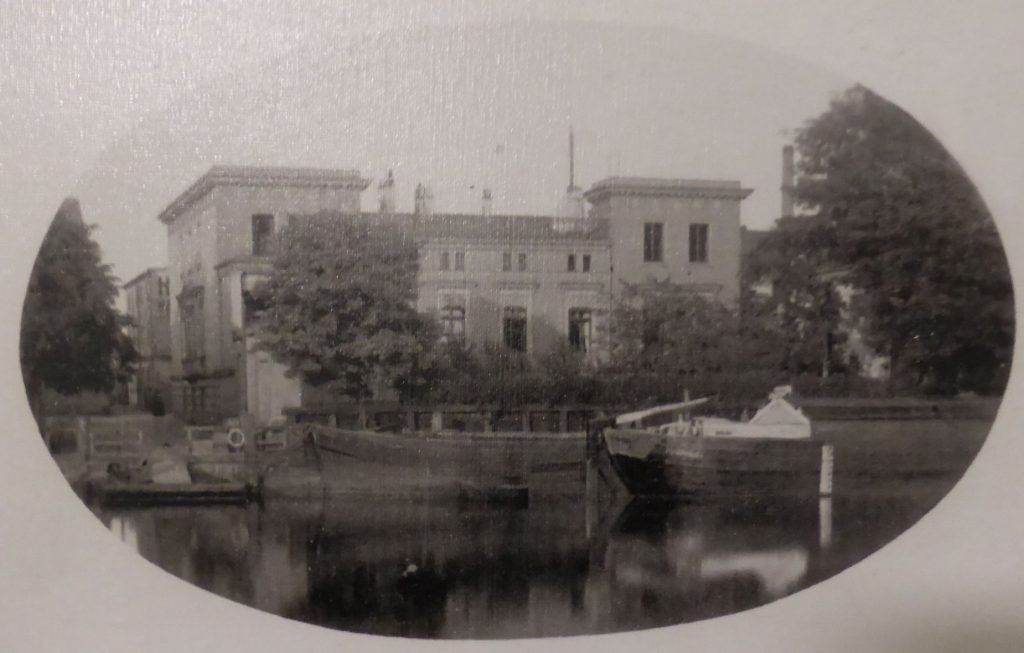 Also the important cantor of the synagogue Eduard Birnbaum (1855-1920) lived for a long time directly in the neighborhood at the Weidendamm.

The tour ends in front of the New Liberal Synagogue, next to which stands the former Jewish Orphanage, built in 1904 with donations from the Jewish community, including a major donation from the widow of amber magnate Moritz Becker, Henriette Becker and his sons. Jewish orphans lived here until the end of 1938. After the November pogrom, the children left Königsberg  for the to the Netherlands and England as part of the “Kindertransport” programme to save Jewish children. Those who got to the Netherlands where later killed but those who reached the United Kingdom survived. The building was used as the Jewish School until 1942. 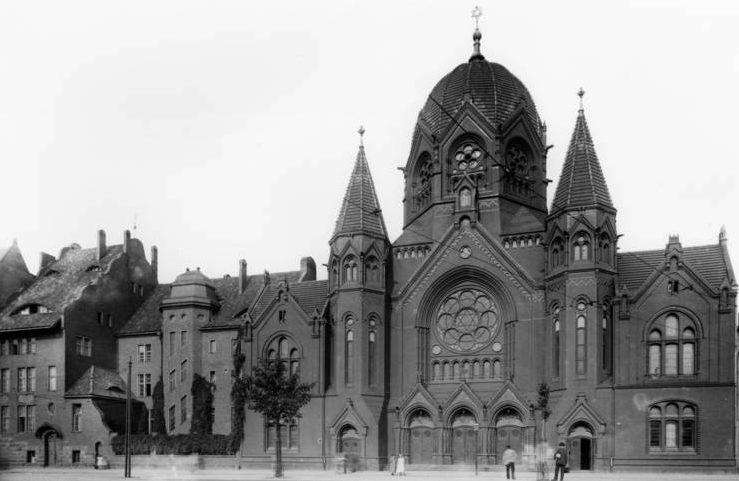 The Liberal Synagogue, built according to a design of the Berlin architects Cremer & Wolffenstein, and was inaugurated in 1896. More than 4,000 Jews lived in the city at that time.

The building, which was financed by numerous donations from Jewish merchants, above all the tea merchants, and by Moritz Becker, burned down during the November pogrom of 1938.  Subsequently, men from the Jewish community had to help with the dismantling. Barracks for Jewish forced laborers were erected here. In 2011 the Foundation for the Construction of Synagogues in Kaliningrad was established. The main sponsor of the synagogue building is the Kaliningrad businessman Vladimir Katsman. The new building was inaugurated on 8 November 2018. The synagogue will also house a museum with a library.