In the 19th century, the Jewish community of Heilsberg (Lidzbark Warmiński) grew to 164 people in 1871, and since then its number has begun to decline – to 88 people in 1905. Since the middle of the 19th century, there was a multi-storey synagogue in the area of the old city centre, at the then Fleischerstrasse 10 (now M. Kajki Street). In the night of the pogrom in 1938, after the murder of the Selig couple, the synagogue was set on fire (with the injured/shooted). Later the upper part of the synagogue building was demolished and the final demolition took place in the 1960s. Currently there is an empty, unmarked plot of land here. During the “Kristallnacht” many Jewish houses and shops in the city were attacked. It is possible that the community cemeteries were also desecrated.

The first “old” cemetery was already established in the first years of the 19th century. It was located in the southern suburbs, on the road leading to the Szubieniczna Gate (Galgentor), in the extension of the present Leśna street. Most probably the cemetery was not used from the middle of the 19th century when a new necropolis was opened. The new cemetery started its function around the middle of the 19th century. It was built on the slope of a hill covered with pine forest on the then mountain road (today Grunwaldzka Street) leading to the Strzelce Mountains ( Shooting Mountains) and surrounded by a wall with an iron lockable gate. Nearby there was a Beit Tehara and a shed with a hearse. At present no traces of gravestones have been preserved in either cemetery.

Curt Rosenberg wrote the book “Bilder aus einem Leben, Erinnerungen eines ostpreußischen Juden” (Pictures from a Life, Memories of an East Prussian Jew). In the book he described the place of 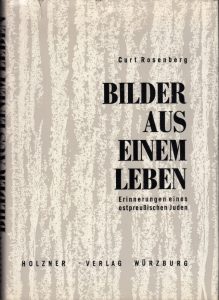 his childhood. This scene from the cemetery is about the time before the First World War. Later he was a lawyer in Hamburg and emigrated to the USA. Here is a quotation (page 120):

“Almost throughout the year, people whose relatives lay in the Jewish cemetery of our city came to visit the graves. In the middle of a beautiful forest, surrounded by fragrant fir trees, lay the burial place. The graves were embedded, as it were, by flowers; the God’s field was surrounded by a wall with a closed gate. The key to this entrance had to be collected at my father’s house. Now it was my task, to which I gladly submitted myself, since sometimes visitors came from distant areas, even from abroad, and had many interesting things to tell. So one day a Herr Adler came from the capital of the Reich to visit the graves of his parents. ………“

Sources for this article: