The Jewish cemetery in Barczewo was established in 1871 at Guttstädter Strasse (today’s Warmińska Street), about 450 m north-west of the town centre, outside the built-up area, on a plot of land in the shape of an elongated rectangle. It is known that there was a wooden preburial house at the entrance.

The cemetery was partially devastated during World War II, when some matzevot were converted into tombstones of German soldiers. However, the building survived the war in relatively good condition. In the early 1970s it was still surrounded by a mesh fence, within it there were about 100 tombstones. 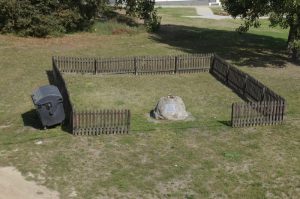 On 16 October 1961, the Ministry of Municipal Economy issued a decision to close the cemetery for burial purposes (decision Uz-c/11/68/60).

In 1976, the municipal authorities decided to remove the gravestones from the cemetery. Some of them were taken over by the Masurian Museum, others were buried in a gravel pit or used by local stonecutters. Piggies and shed were placed in the cemetery.

In 1995, a boulder with a plaque with an inscription was placed on the edge of the cemetery: “The place of the former Jewish cemetery”. A fragment of the cemetery was surrounded by a wooden fence.

In 2017, thanks to the efforts of, among others, Krystyna Szter from the Social and Cultural Association “Pojezierze”, about 20 tombstones found were placed in the yard of the former synagogue in Barczew. 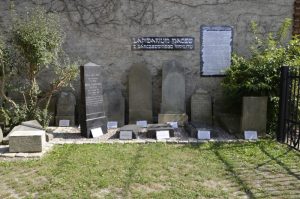