According to Fritz Gause in his study “Geschichte des Amtes und der Stadt Soldau”, Jewish settlement in Działdów (in German: Soldau) was banned for hundreds of years. There are mentions of Jews in the city archives, however, they were usually visiting merchants. It is known that in the Middle Ages there was a company in the town, selling surplus wool to an unnamed Jew. In the years 1683-87, there are records of Jews from Ciechanów, Mława, Kowel, Pińsk, Żółkwi, Różan and Zamość who paid the so-called Jewish duty (“Judenzoll”) in the town. In the 18th century, a Jewish neophyte, a boy named Christian, is mentioned. In 1791 a Jewish supplier of the Prussian army, Jakob Itzig, applied for permission to settle in the town. After protests of local merchants, fearing competition from the Jews, Itzig’s application was rejected. A similar situation took place in 1806, when Salomon Natan Mejer from Bieżuń tried to do business in Działdówo (Soldau). His application for a trade concession was rejected by the municipal authorities.

This condition changed only in the early 19th century. On March 11, 1812, an edict was issued which allowed Jews to settle permanently in Prussia and equated them with other citizens. In 1816, Szymon Mejer from Dąbrówna (in German: Gilgenburg) settled in Działdów (Soldau). He was followed by other Jews from Poznań (Posen), among others, who came to the town. In 1847, a religious community was established in Działdówo (Soldau), which at that time had “50 heads”, and in 1862 – 109 members. Initially, the Dzialdowo (Soldau) followers of Judaism celebrated their prayers in one of the chambers in the town. In 1865 a chapel in the castle was rented for ten years and in 1874 a synagogue was erected.

As in other towns, also in Działdówo (Soldau) Jews played an important role in the local economy. They traded in alcohol, textiles, glass, porcelain and grain. Members of the Jewish community were among the richest inhabitants of the town. Some of them – like Samuel and Isidor Buetow – sat on the town council.

We know little about the history of Jews in Działdówo (Soldau) at the turn of the 19th and 20th century. It can be assumed that difficult economic conditions, the First World War and subsequent administrative changes in this part of Europe forced most of them to emigrate. Many Dzialdowo (Soldau) Jews considered themselves to be German citizens. This attachment caused that after the reborn Polish state was established in 1919, most of them decided to leave. There were exceptions, however, to which the Pieck family belonged, maintaining numerous friendships also with Poles. A case of a mixed marriage is also known. Two years before the outbreak of World War II, only seventeen people of Jewish origin lived in the town.

After Dzialdowo (Soldau) was occupied by the German army in 1939, a penal camp was set up in the town, where, among others, prisoners of war, representatives of Polish intelligentsia, priests and political prisoners were imprisoned and murdered. Among the prisoners were also Jews, deported from various Polish cities.

The Jewish cemetery in Działdówo (Soldau) was established in the mid-19th century. The exact date of its establishment is not known to us, for sure the necropolis functioned already in 1863. The cemetery was located at the present Sienkiewicza Street, on a rectangular plot of 0.4 ha.

Let us quote an excerpt from a letter wishing to maintain the anonymity of our editorial correspondent: “During the First and Second World War, German soldiers were buried on the left side of this cemetery, while the right side was “Jewish”. The last burial of a person of Jewish origin – Minny Pieck – took place in May 1939. During World War II, other people of other nationalities were buried in the cemetery. In the second half of the 1980s, the left part of the cemetery was exhumed. The remains were transferred to the municipal cemetery”. 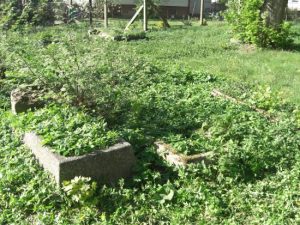 As a result of the damage done during the war and in the later period, few broken tombstones have survived to this day. The gravestone of the Soviet soldier Sergei Kuźmicz Balabinski, from 291 independent anti-aircraft artillery squadron, who died on February 20, 1945, probably in an accident, crushed by an overturned cannon, draws attention. The concrete foundations of several devastated graves are also visible. The necropolis is fenced, above the gate there is a plaque with the Star of David and an inscription: “Jewish Cemetery”. 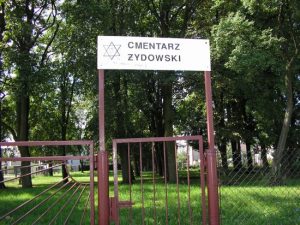 Click here to watch the video from this cemetery (6 min) >>