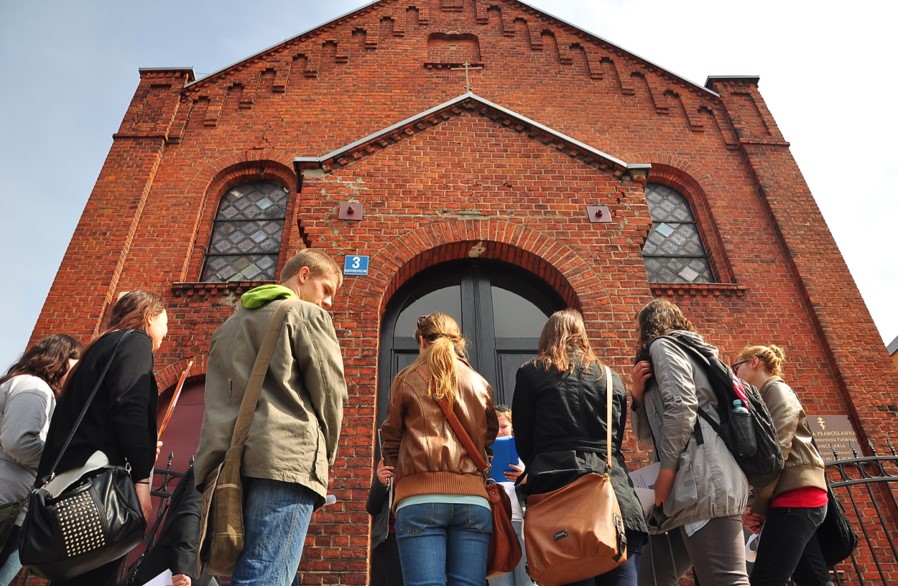 From the beginning of its existence, the community had its own house of prayer. In 1847 the Jewish community presented the synagogue statute for approval, but the synagogue itself and the school were opened at 1896 at the then Gartenstraße (now Roosevelta Street). The neo-Gothic building was 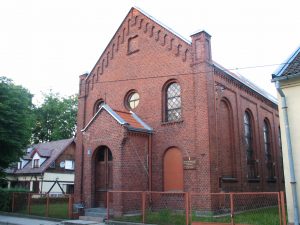 plundered during the “Crystal Night”, but was not set on fire. After the end of the war, the building of the synagogue was handed over to the emerging Orthodox church. Currently, it houses the Transfiguration Church.

The Jewish cemetery in Mrągowo (Sensburg) was established in 1859 at today’s Brzozowa 2 Street. The necropolis was located at the end of the Catholic cemetery, on the land donated to the Jewish community by Justyna Timnik, the widow of the mayor.

Until the cemetery was established, Judaism believers from Mrągowo (Sensburg) buried their dead in Ryn (Rhein) or Młynów (Ober Mühlenthal). The cemetery was to be devastated even before the “Crystal Night”. In 1936, local members of the NSDAP and the Gestapo planted explosive charges under the tombstones of the prominent members of the Mrągowo (Sensburg) community. Matzevot of poorer Jews from the town remained in the cemetery. However, partly destroyed, it survived the war and in 1946 or 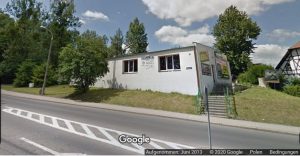 1947 it was officially liquidated, by order of the then district authorities, most probably by the decision of the village headman, named Krzewoński. All the above-ground traces of the necropolis were removed. Apparently, single tombstones were supposed to be located in the stairs of the Protestant cemetery gates and in the foundations of some houses built after the war. Nowadays, on the place of the cemetery there is a modern building of the Tara chemical laundry.

In October 2009, a competition for children and young people was held for the design of a monument commemorating the Jewish cemetery in Mragowo (Sensburg). (Mrągowo Social Cooperative PROFIT in Mrągowo, in partnership with the Ecological and Cultural Education Association “SEEiK”, has been organizing the “Prof. Abraham Joshua Heschel-Competition” among children and youth under the motto: “Tolerance and Civil Society. The place of Jews in the culture and history of Warmia and Mazury”).

An exhibition with pictures of places in Mrągowo (Sensburg) connected with the Jewish Community and posters commemorating the Holocaust. The exhibition was so popular that it was hired in May by the Military Training Troops in Mrągowo. These measures were expected to show the multicultural of the little motherland – Mrągowo to inhabitants and young people.

The project was done by students under the history teacher Magdalena Lewkowicz. The owner of  the land of the former Jewish cemetery also offered her help.

The main aims of the project were: 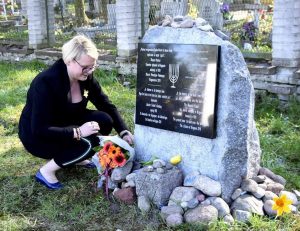 At the same time Magdalena Lewkowicz gave the information to the public about finding of a fragment of the only Jewish gravestone in Mrągowo (Sensburg). It turned out that it had been extracted by the soldiers during the accidental excavations. It was kept in the building of the former army unit in Mrągowo and then forgotten. May be the fate just wanted that it waited for someone to find it and commemorate the trace of Jewish Community in the Mrągowo district. The photos and the caulked Hebrew text of the gravestone were sent to Yad Vaschem in Israel. This gravestone fragment has been in the Museum of Mrągowo (Sensburg) since 2018. The monument at the cemetery is made of stone. Thanks to the sponsors the plaque at the Monument was made and unveiled on 2018 Apr 19. 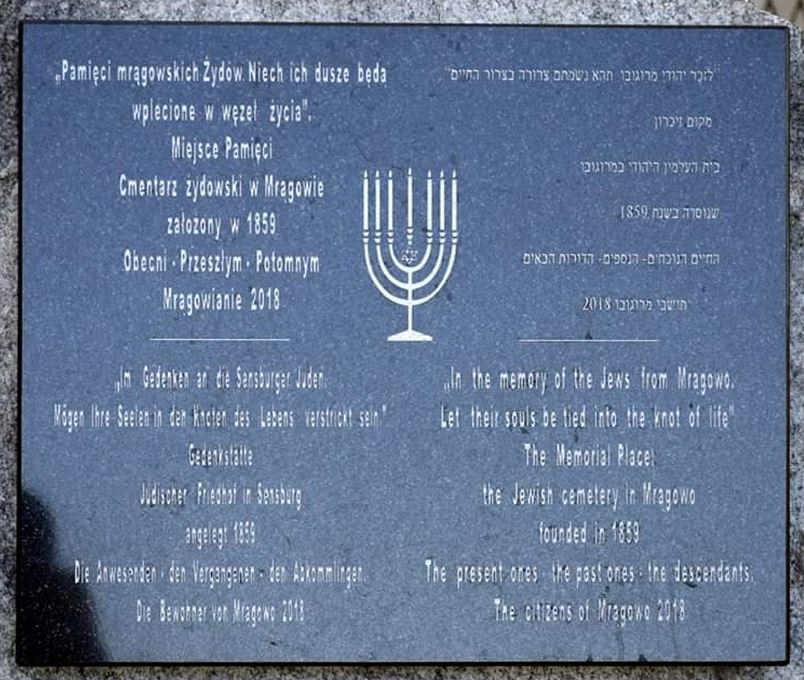 By the end of 2015, seven editions of the competition, in which the memory of Jewish presence in Warmia and Mazury and in Mrągowo (Sensburg) itself is being restored, have already taken place. The first edition of the competition included tasks: “The common heritage of Jews and Poles in the land of 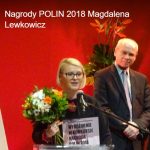 Mragowo (Sensburg) – doing the work using any technique” and “Design, paint, describe what you think the monument commemorating the Jewish cemetery in Mragowo (Sensburg) should look like”. In the seventh edition of the competition, one of the tasks was to write an essay entitled ‘Synagogue – my town was once decorated with a beautiful building’.

Mrs Magda Lewkowicz was honoured with the POLIN Award for her achievements in December 2018 in Warsaw.

Sources for this webpage: