The Jewish cemetery in Olsztyn (Allenstein) was established in 1818 or 1819, in the south-western part of the town, at Seestrasse (today’s Zyndrama z Maszkowic Street). With time, the cemetery plot was enlarged by a part from the south-western side, eventually creating an elongated rectangle of approximately 25 x 160 m.

The cemetery was fenced with a brick wall. In the years 1911-1913, a pre-burial house and an administration building, the so-called gardener’s house, designed by Erich Mendelsohn, an architecture student at that time, were erected at the entrance.

The cemetery survived World War II in relatively good condition. It is known that until 1949 burials were still taking place there. At that time the object was taken care of socially by Marian Smoliński.

However, the building was gradually devastated, among other things as a result of stealing tombstones. In autumn 1958, by order of the Presidium of the Municipal National Council, workers removed a significant part of the tombstones, rumpling graves and partially destroyed the fence. 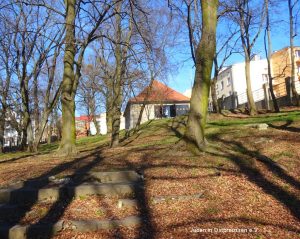 In the spring of 1959, the editorial office of “Fołks Sztyme” received a letter from two residents of Olsztyn, concerned about the condition of the local cemetery. One of the signatories of the letter was Marian Smoliński, who already “felt obliged to guard their [graves] and defend them from looting and destruction. On his own initiative and selflessly fence the cemetery with fence and wire and (…) risking his life, he sometimes spent those human hyenas from the cemetery”. The letter describes the damage done in the cemetery in the autumn of 1958 by workers sent by the Presidium of the Municipal National Council. The authors of the letter expressed their indignation, disbelief that such an act could have been carried out by the authorities, they also expressed their concern about the influence that the desecration of graves has on young people. In their account, the cemetery was “an area where drunks and hooliganism of all sorts organize orgies, and what’s worse, even preschool youth use the cemetery site as a playground, depicting tombstones, demolishing other monuments, breaking trees and making incredible screams. We citizens cannot imagine what these young people will enter the school with later and how they will react to the

teachers’ words about the cult of the dead. In conclusion, they emphasized: “What happened here is an affront to all law and ethics, it certainly does harm the environment, and our most sacred feelings are raging.

After Marian Smoliński’s death (died 04.04.1969), the cemetery was transformed into a park by the authorities. The tombstones after being smashed were used to build walls at the “Casablanca” restaurant. In 1971, the cemetery buildings were used as the seat of the State Archive, reconstructing them and connecting them with an annexe.

In the 1990s, activists of the Cultural Community Association “Borussia” became interested in the cemetery. Thanks to their involvement, a lease agreement was signed with the Foundation for the Preservation of Jewish Heritage in Poland (which recovered the building as part of the process of restoring the property of former Jewish communities). Between 2006-2013, the buildings were gradually restored and the cemetery grounds were fenced. Some of the damaged matzevot were also recovered. Currently, the former pre-burial house houses the seat of the ‘Borussia’ Association.

Link to the Borussia Olsztyn Foundation and Cultural Community  (Polish) >>