The new series about the pogrom night 2018 on Facebook 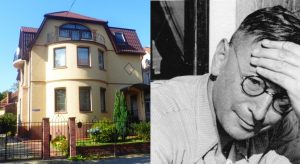 Sawmill owner Arthur Propp was also arrested on November 10, 1938. In the community cell, the Jewish men quickly realized that the National Socialists would blackmail them all before they could return to freedom.

“S. came to pick me up and led me up to the police station. In the room stood a beautiful woman who looked at me in a friendly way. I froze: I had never seen her in all my life. But obviously she would turn me in. And to be accused of racial disgrace would mean the end for me. But instead, in a rather casual tone, she said, ‘Good day. You must know that my husband is the right hand of Gauleiter Koch. I have heard that you are thinking of selling your villa in the Kronprinzenstraβe. I’m sure you won’t have any objections if I buy it’. Well, I thought losing a house is better than racial disgrace. ‘Certainly,’ I replied, ‘it would even please me.’” 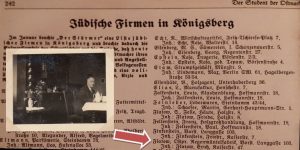 In February 1938 a list of Jewish entrepreneurs, shops and doctors appeared in Königsberg. Private addresses were also given. It was an address directory which also served for the pogrom night. Like many other people, the entrepreneur Erich Flatow was arrested for several weeks.
(The photo of Erich Flatow was taken by his 13-year-old son Manfred.) 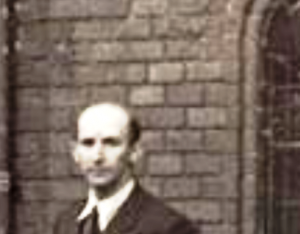 Dr. David Kaelter, headmaster of the Jewish school in Königsberg, who lived in a side wing of the orphanage, remembered that terrible night:
“On the night of the 9th to the 10th of November 1938 we woke up at midnight by a lot of noise on the street and in the adjoining synagogue. We saw through the windows how the Nazi entered the synagogue, ripped the Torah scrolls out of the closet, systematically destroyed the synagogue and finally set it alight. Afterwards, the mob – under the leadership of SS people – attacked the Jewish orphanage and drove the children into the street. […] With great difficulty, we, my wife, our one-year-old daughter and myself, were able to escape to the street unhurt without being able to take anything or get dressed. ”
Dr. Kaelter was arrested on 10 November, but released after 10 days. Then he emigrated with his family to Palestine. 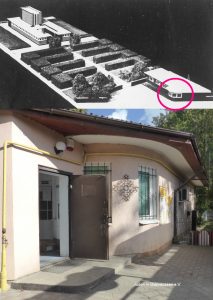 On November 10, 1938, Königsberger SA men set fire to the hall of the Jewish cemetery in Steffeckstraße. This impressive building, designed by the famous architect Erich Mendelssohn, was inaugurated in the summer of 1929. From the cemetery plant today only the gardener cottage is preserved. 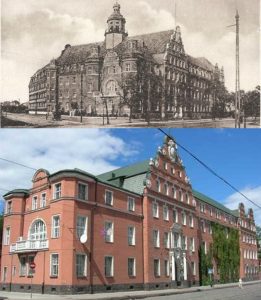 In the early morning of 10 November 1938, 450 Jewish men were arrested in Königsberg and taken to the police headquarters. There they were partially beaten and maltreated. Especially the cantor Pick was beaten, who was to sing the Horst Wessel song at the request of the SS people, but instead began to sing a Hebrew song. In the German Reich, the Jewish men were taken to different concentration camps. As the transportation to Poland through the Corridor would have caused organizational problems, the Jewish men remained in custody in the city of Koenigsberg. Women and children were allowed to hand over laundry and food. It was a traumatic experience for the families and the Jewish community.
Source lower pic Wikimedia Commons Author AI9999 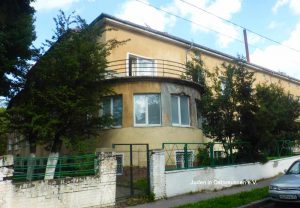 On November 9th 1938 the residents were expelled from the beautiful new Jewish old people’s home in Regentenstraße 26/28. They were then quartered in the Jewish orphanage in Lindenstrasse. The old people’s home was confiscated by the Nazis. Today there is a hospital in the building.